As I said last week, my ID Card arrived with no family name on it, just my first name and my father's name.

A problem? Dunno, so I went back to the Al Barsha EIDA office to ask.

The receptionist seemed unfazed, as though others might have asked a similar question before.

She said 'everything is in the card, so it doesn't matter that your family name is not printed on it'.

I'm going to leave it at that.

When I have to produce it for something, say like hiring a car for example, and the company presumably doesn't have a reader to read what's 'in' the card, I'll sort it out then.

Getting very angry, shouting, jumping up and down with rage usually seems to work so I may try that.

Or maybe I'll carry with me the piece of paper I printed out from the EIDA website which shows all the names as they should have appeared.

Or perhaps I'll do both.

Incidentally, a word of praise for the counter staff at the EIDA office.

They get a fair bit of stick in the media, on blog comments and in general conversation - arrogant, unhelpful, dismissive.

That hasn't been my experience.

When I arrived at the reception desk there was a crowd in front of it, a well-behaved crowd it must be said but an untidy side-by-side queue rather than a behind-each-other queue.

The Emirati receptionist was looking harrassed but was polite and helpful to everyone.

Also bear in mind that she was not conversing in her own language, nor were many of the people asking questions.

A couple of times she said 'Sorry I don't understand you' and she wasn't alone in that, I hadn't understood the question either.

Actually I often have that problem. While I understand the words being spoken they don't make a coherent sentence and so I don't understand what's being said.

English is my mother tongue, so an English-language conversation between people both having it as a second or third language must be very, very difficult.

Anyway, full marks to the lady.

It's obvious there are still many problems with the whole ID registration question and I came across this ad this morning. 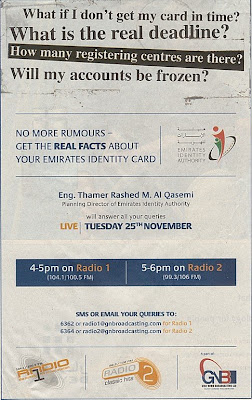 It could be helpful or it could be a comedy show. Either way it'll be worth listening to.

Will the right questions be asked and accurate answers be pressed for? Or as I've complained about so often, will it be an official denial that there are any problems, which will be accepted without question?

If you're out of range you can listen to it all online here.
Posted by Seabee at 12:24 pm

You really did get your ID? This seems like record time. My hubby and his colleagues have simply been trying to register and registering itself has taken over three weeks of rounds to the EIDA registration centers... not to mention that the EIDA site doesn't work most of the time..... You are lucky!

Yes I really did, and it all happened exactly as I've said in my posts.

The only difficulties were the four hours it took to get the website to give me my barcode, the website changing information I'd entered and then the lack of family name on the card itself, which I also guess was a computer problem.

I have just updated my experience at my blog before I saw yours!!

Except for the fact that the site was getting stuck, the entire process itself is very nice. The site issue was on account of the number of hits which has since been resolved by hosting the software on other govt sites.

But I say HATS OFF to the staff. They are extremely efficient and the entire workflow was very very smoot.

Seabee, you are indeed a more patient man than me.

I know it isn't the individual staff members fault, but to have the correct name written on a National ID card is a fairly basic concept. I find it absolutely unbelievable that something this simplistic cannot be achieved here.

Not only are they (UAE Govt) wasting the valuable time of its expat population, but their pathetic attempts to create a fear culture by freezing bank accounts is third world guerilla tactics at best, and not something I thought that they would ever stoop to.

I understand that if it wasn't for the threat of so many exptas removing their money on New Years Eve (during the recession we are not actually having here) then the freezing of accounts may have actually occurred. Then the powers that be would have said "we told you so".

The whole thing would be hilarious if it wasn't true.....

Dave it was the website that was the problem, I assume the software they use - and you can bet it was expats who put that together for them! I'm not excluding nationals from making basic mistakes or defending those who do but a fact that's often ignored is that most of the work, incuding the stuff that goes wrong or is badly planned, is done by expats. 'Experts' from overseas are employed, our countries included, who are anything but expert.

I wouldn't say it was 'the UAE government' making the threats. An official working for a government department did, but that's a different thing altogether. His boss fairly quickly said fines and freezing bank accounts were not true.

an hour of a radio show answering questions. is the ID card that complicated? lol

Hi Here's your chance to tell your story on CITY7 TV.
Have you been affected by the global credit crunch in terms of losing your job, not being able to secure a bank loan, unable to pay your rent upfront or losing your home (as a result of the one-family-one-villa rule). If so, CITY7 TV would like to hear your story. WARNING: This would be on-record for general broadcast. I can obscure faces on screen in cases where revealing your identity could be dentrimental to your safety and employment prospects. So don't just bemoan your lot, put it on record and see what might happen. Email Lizzy at lizzy@city7tv.com