Having seen a few bushfires and the destruction they can cause, the news from California has been terrible.

But today it's a little better. The strong winds which are always firefighters' most feared factor are dropping and humidity is rising. We can only hope that continues.

These are huge fires. Around a thousand homes have been lost and tens of thousands of people have had to evacuate.

There are many graphic photographs in the Los Angeles Times and a lot of them make the hair on my neck stand up.

A wild fire like this is hard to describe. At a distance there's a strange hush in the air, an incredibly eerie redness all around.

Closer to, the noise is deafening. In Australia our ubiquitous eucalypt trees, full of oil, literally explode into flame.

After so many days of battling these monsters the firefighters must be exhausted. I can't tell you how much admiration I have for them.

The word is much over-used, but these men and women are true heroes. Risking their lives to save others' lives and property, going towards and facing a terrifying situation others run from.

Some examples of what they're currently up against in California. 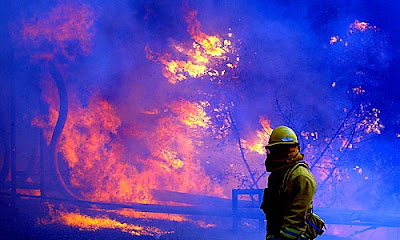 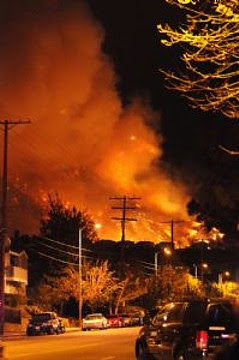 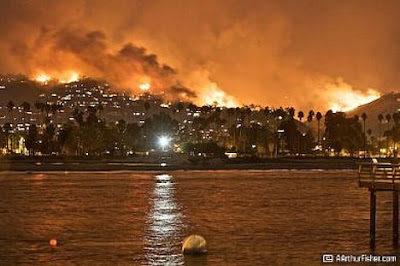 The full stories and amazing photographs are here in the Los Angeles Times.
Posted by Seabee at 5:50 pm

The tragic loss inspires empathy and sympathy the world over, I am sure.

If you choose to build and live in an area where bushfires have been happening on a regular basis for thousands of years you take a risk that a bushfire in your area [and probably wipe out your home] will occur sooner rather than later.

Bush fires are a fact of life and I'm sure that most people appreciate that fact when they decide to take the risk.

I wonder what the cost of insuring your house against complete loss in a known bushfire area would be?

Knowing what we know about bushfire areas,as an insurance company I wouldn't be too keen to offer the appropriate policy, probably hugely expensive..