One thing the RTA could do to ease drivers' inconvenience is to ban the convoys of mobile advertisements which add to the congestion on our roads.

Three of them have been cruising around New Dubai in recent days - I got stuck behind this one when he peeled off from the other two to have a break. 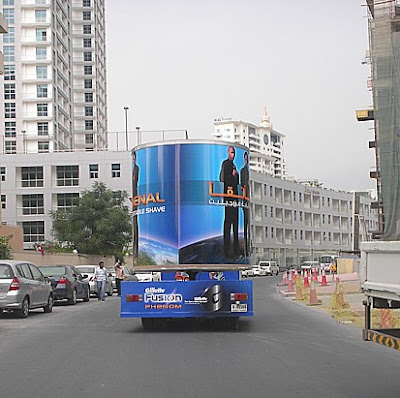 Another thing they could do is to stop the street sweeping trucks from clogging up the roads during peak hours. There's one regularly around Al Sufouh Road near the Tecom area during the morning peak traffic. It crawls along the inside lane, as it must, effectively preventing traffic from using that lane and forcing it to merge into other heavily congested lanes.

The RTA website says Customer Centricity and their vision is Safe and Smooth Transport for all. That would be helped by the removal of these two little unnecessary irritations.
Posted by Seabee at 3:14 pm

Poor sweeper probably got stuck there much earlier and couldn't exit once the traffic had built up. Now he's out of fuel and about to be converted to a fruit/vegetable stall.