Australia's the world's driest inhabited continent, and the drought over the plast decade is testament to that.
Not this year though.
We've just had the coldest May since 1970 and we have plenty of rain, 100mm since yesterday morning.

We're also getting things I haven't seen before. This morning I looked out of the lounge window to see this: 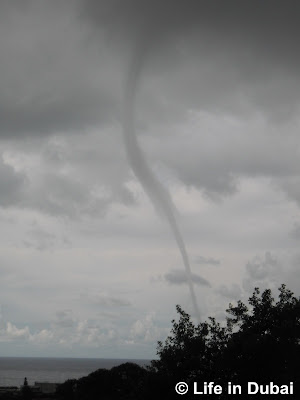 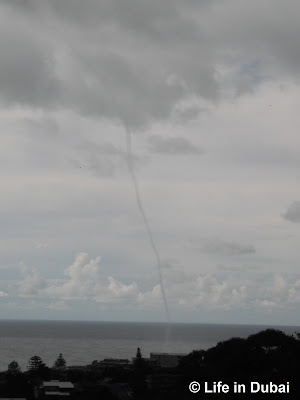 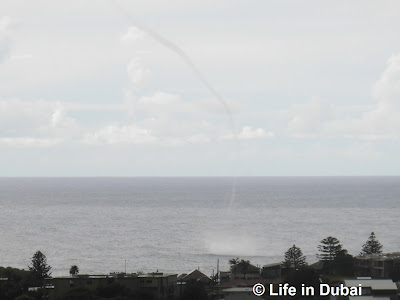 Many of us have discussed on our blogs for years the sentences handed down for public indecency offences. While we accept that different cultures have different sensibilities it's hard to understand how an offence such as an alleged rude hand gesture can result in far more severe punishment than a real crime such as robbery.

A very interesting report appeared in The National yesterday including comments from several judges about the sentences they often hand down for people found guilty of indecency.


"Public decency laws need to be reformed so that punishments can more accurately reflect the severity of the offence, several judges have said."


I've questioned in various posts on the subject whether the courts had any discretion in the sentences they hand down, or whether they are mandatory. The judges quoted in the report have answered that.

"An expatriate who has committed an offence such as raising his hand in a bad gesture should be punished, but not by destroying his chances of returning to this country to make a living," one lower court judge said. More serious crimes such as theft were not punished by deportation, he pointed out."

The courts have taken some stick, especially in the overseas press, over their draconian sentencing but it seems they have little room for discretion.


In fact judges, or at least some of them, seem to be of the same opinion as us.


It's a fascinating insight into the legal system here in The National.
Posted by Seabee at 10:36 am 5 comments:

There hasn't been anything to report because I seem to have lost the last couple of weeks.
Dubai to Sydney door-to-door is a long and tiring journey so that takes some recovery time.

Then there's the six hour time difference that confuses the body clock for a good while.

Added to that a virus has had me flat on my back feeling awful for a few days.

But at least I was indoors in the warm.

We've had the wettest, windiest, coldest May days for a long time, so indoors was the place to be.

Tuesday we had severe weather warnings for the Sydney area and got winds of up to 110kph overnight.

They were southerlies - that's the cold ones down in this part of the globe. The weather bureau said it would reach a maximum of 14C but the winds would make it feel ten degrees colder.

I poked my nose out and it sure did feel like about four or five.

The coldest May day for eleven years they said.

The battered body is adjusting to that too, having just come from 42C in Dubai.

I'll just about get on top of it all when it'll be time to come back.
Posted by Seabee at 8:47 am No comments:

"Gulf News was unable to get a response..."

This time it's from Sharjah, where according to the Gulf News report, expat residents have found notices from SEWA (Sharjah Electricity and Water Authority) on their doorsteps demanding payment of additional deposits of at least Dh3,000...to be paid within seven days or the services will be disconnected.

"We tried to contact Sewa to inquire through their phone number attached with the notice but in vain as no one ever responds," said one resident.

High-handed or incompetent? Both, probably. And just so typical. Make a statement, say something controversial, change the rules overnight, go into hiding.

You can read the full story here.

And on that note I'm getting away from it for a few weeks, back to Oz. I'll be back towards the end of June, although I'll probably post the odd piece on Life in Dubai while I'm away.

The suitcase is packed with sweaters; Sydney will be sunny but with a max of 20C and a minimum of only 8C tomorrow when I arrive according to the forecast. But cool as it is at least I'll be able to breathe the air, it won't be full of dust as it is today in Dubai.
Posted by Seabee at 12:28 pm 1 comment:

I found a couple of news stories about money interesting, coming as they did at the same time.

In Oz the federal Treasurer Wayne Swan delivered the budget which included an increase in overseas aid to $4.8 billion.

At the same time Abu Dhabi announced that it was donating $30 million to our northern state of Queensland to build cyclone shelters, after the devastation caused by Cyclone Yasi.

Here are more of the old photos I rediscovered recently.
These I took in the fish market and the fruit/vegetable market in Deira in 1980. 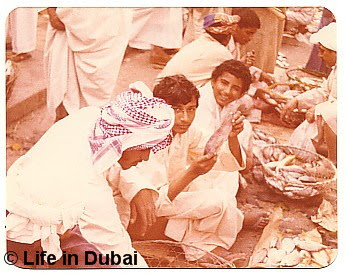 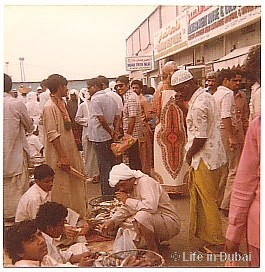 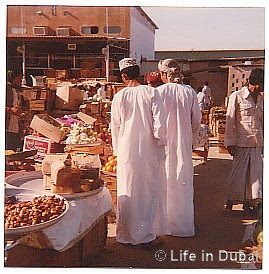 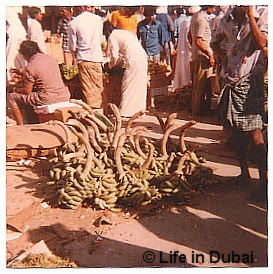 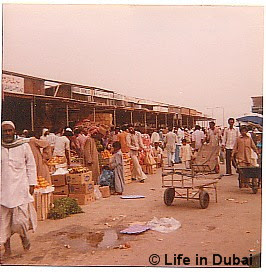 I've been through that forgotten bag of old Dubai photos I mentioned the other day and scanned some of them, so it's time to share them with you.
What's interesting is not so much the buildings themselves in these photos but what's around them. Or, compared with today, what's not around them.
My first apartment was in a brand new building and I was one of the first to move in.
It was in Deira just behind Al Ghurair City. Although back in 1977 when I moved in construction of Al Ghurair Centre, as it was originally called, hadn't been started. 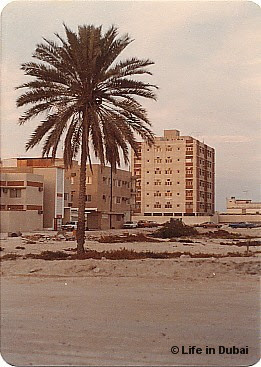 Mine was the top floor apartment on the right of the building. From it, three or four years later, I had a good view of Al Ghurair Centre. 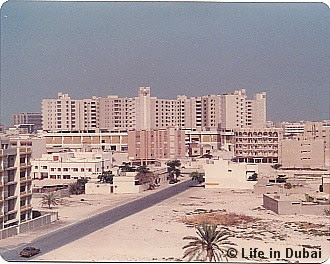 You can see that it was still  far from the built-up area that it is today - in fact it was almost rural: 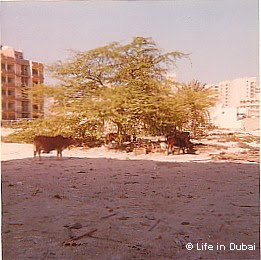 Over the other side of the Creek, behind the newly-opened Trade Centre was the Hilton hotel. This photo has a note on the back that it was taken in 1979. 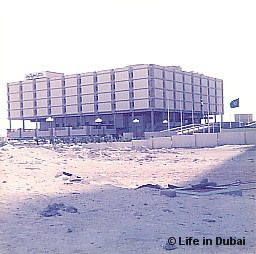 The Hilton was demolished a few years ago but the Clock Tower is still very much in place, although not the prominent landmark that it was back then: 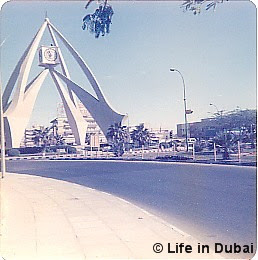 The Dubai Municipality building in Deira is still there, but the surrounds are very different now. 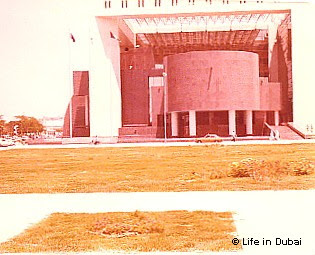 This one was also taken in 1979, from Deira looking across the Creek to Bur Dubai: 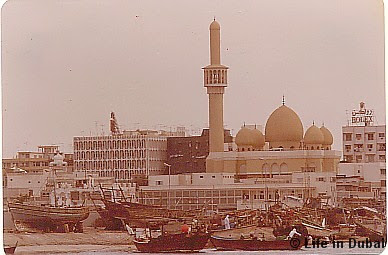 No concrete banks you'll notice, just the natural sand and plenty of dhows and fishing boats.

There were a lot of original buildings in Bur Dubai too, complete with original, working wind towers. 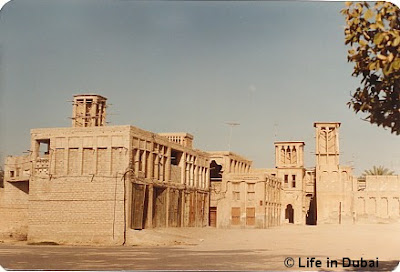 Signs of the times

Here's some signage I stumbled across in the UK which caught my attention.
The first isn't unique to the UK of course, the stupidity is world-wide.

A packet of peanuts...with an allergy warning to buyers that it contains nuts and may contain traces of nuts. 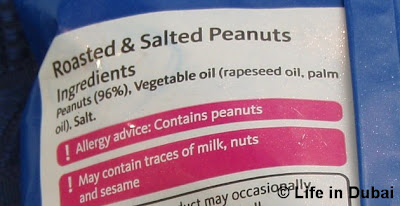 You'd hope a packet of peanuts would have at least traces of nuts, wouldn't you.
Then a couple of local signs.

An obviously dissastisfied customer of the  enclosure solutions operative  wanted the passing world to know of his frustration.

A reply was added by said fencing contractor: 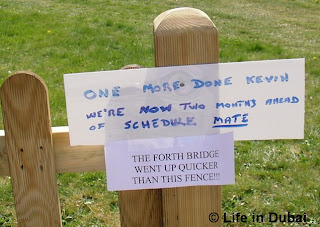 And another, this one a classic of the way the bureaucratic mind thinks so differently from the rest of us.

From their parallel world you get this: 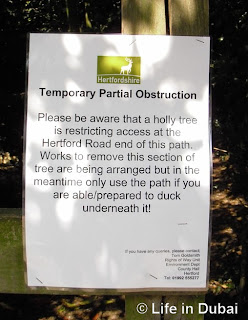 A bureaucrat sees the overgrown shrub, goes back to the office, writes a notice, gets it printed and laminated, goes back to the site and pins the notice in place. Then presumably puts in a requisition to the environmental solutions department to carry out the necessary landscaping.

A non- bureaucrat would simply have gone back with a pair of shears and trimmed the offending leaves.
Posted by Seabee at 12:23 pm 3 comments: