Yesterday when I mentioned the damage reportedly done by roadbuilding machinery in The Springs I said I'd post a photo of what nearby construction has done for us.

We have a building going up maybe 100 metres away, perhaps a little more. They had some sort of drilling machine going for the foundation work, which vibrated at the exact pitch that has your teeth rattling.

We have very heavy double-glazed windows and doors with laminated safety glass.

Here's what the construction site drill did to it... 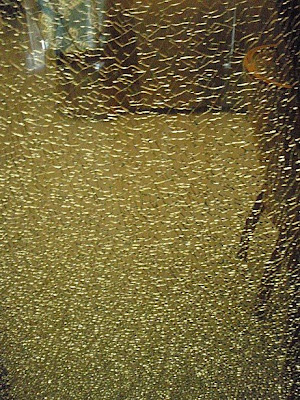 Did I miss much?

Back in Dubai and, although I checked in once in a while to the UAE Community blog and the newspapers, I feel completely out of touch because things change so quickly here.

The UK announcing the highest terrorist alert warning for Dubai was the big Dubai item in the papers while we were there, although the response here seems to have been a yawn.

Waiting in my home e-mail box when I checked it this morning were three particular news items which friends thought I'd be interested in. They're three that I hadn't seen while we were away and if I'd been here I'm sure I'd have posted about them.

They were the Defence Roundabout bridge collapse, a story on damage being caused by the roadworks at The Springs and the property ownership/residence visa saga.

Thankfully no-one was killed in the bridge collapse, although five workers were injured. According to the RTA a five metre section of the under-construction bridge collapsed because of "miscalculations on the part of the contractor as a result the pillar and the scaffolding could not take the load of the bridge."

The Springs parallel roads development is not only causing angst because it changes the property from what buyers were led to believe it would be. It's apparently causing physical damage too. Heavy machinery is making villas shake and cracks are appearing in the walls.

I know, we have the same problem in Dubai Marina - tomorrow I'll post a photo of the effect the machines have on nearby buildings.

There's a second theme to this story too, one I've talked about before. All the authorities say the new developments are not their responsibility because they're private developments.

In this case the roads are being built as part of the RTA's huge parallel roads project but their comment was 'Talk to Emaar' (the Master Developer). Of course it's the old Catch 22 because Emaar says the roads are managed and regulated by the RTA.

You get dizzy going round in circles.

And the big one, the property ownership/residence visa saga rears its head again.

This time it's a mixture of inaccurate and irresponsible reporting, apparent confusion about the rules as they exist and another confidence dent for Dubai as an honest place in which to do business.

Basically the story says that residency visas based on the ownership of property will be replaced by short term, presumably visit, visas.

Dubai is to introduce a set of short-term visas for foreign investors in the real estate sector, a top official said.

"We have submitted the proposals to this effect to the higher government authority in Dubai to review the visas for property buyers."

Mr Galita says that he has submitted a proposal that the rule is reviewed, the paper says 'Dubai is to introduce' the change. Those are two very different things, which the 'journalist' and the Editor should have seen.

The story goes on that Mr Galita's comments "reverse the government's earlier stand."

Mr Galita is Chief Executive of Rera, not a member of the government. I thought that only Sheikh Mohammed Bin Rashid had the authority to overturn previous government decisions.

I can't believe they've understood Mr Galita correctly either, because I'm sure he must be aware of the arrangement in place for property related residence visas. They quote him as saying:

"Even if the investment company applies for a residence visa for a buyer...If a development company goes bankrupt, what happens to the residents sponsored by that particular company?"

In amongst the misleading and confusing reporting there are some facts. For example, the report does explain this arrangement between Master Developers and residency department, it does say that the residency visa is not an automatic right. Overall the story is a mess.

In short, someone buying property who wants a residency visa must request the Master Developer to apply for it. If they agree to do so, the Residency Department will then decide whether to issue it. It is not an automatic right as many small developers have advertised and only the three government owned Master Developers have the arrangement.

That doesn't mean that the arrangement won't be changed of course, even though it means that what people bought and payed for is not what is delivered to them. It wouldn't be the first time people have been sold something, their money taken and then a very different product delivered.

It's a big problem for Dubai, when its future depends on business, a vital and huge part of which is real estate, business depends to a large extent on confidence but confidence & trust in Dubai as an honest place to invest keeps taking a beating.

A definitive, final, clear-cut statement from the government about this property/residence issue is urgently needed.

Here are the original stories:

Until the end of June it's a business trip to the UK, followed by a chance to catch up with old friends who are now living in Provence.

I bet they get more visitors than when they lived in the UK! Although they lived in a great little village there too, so maybe they did get a lot of weekenders to see them even then.

Anyway, a horribly early start, as it so often is from DXB, but at least we arrive in London at a reasonable time, then it's up the M1 to Leicester for the first set of meetings on Monday.

It's endless. Finish something, presumably to what passes in Dubai as a plan, let it settle, then dig it all up and start again.

Knowledge Village this time. A largish roundabout, finished for a long time, landscaped with grass and palm trees. 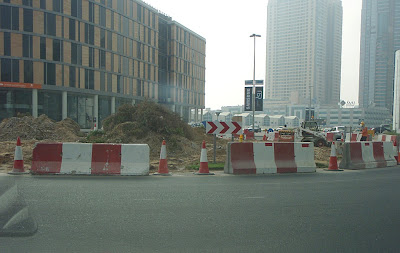 The monetary and materials waste, the added pollution, the inconvenience, the danger of ever-changing roads...

Is it really that hard to get it right first time?
Posted by Seabee at 12:19 pm 3 comments:

Road through The Springs

The Springs is a gated community of town houses with the community, scenic waterways and lush landscaping make a perfect environment for young families and couples.

It seems to have disappeared from the news outlets, but I remember there was a rumpus a while ago about a highway to be built through the community.

I received an update when a friend sent me this message and photos last week:

I visited my mum in the springs yesterday… and witnessed the beginnings of the dreaded "highway" that will be running through the Springs 2 until 4.

My mum said that the residents/neighbours she has spoken to are all in a state of shock. The palm trees have been torn down, and now the grass is being removed. 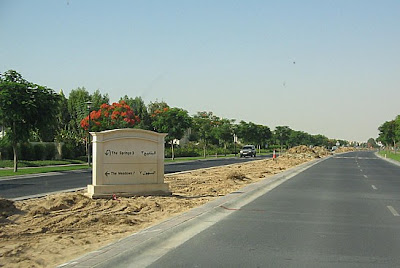 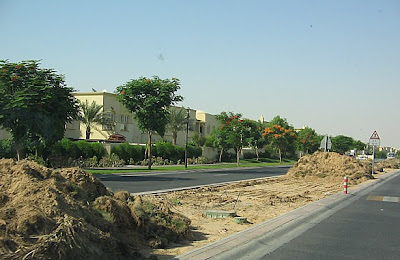 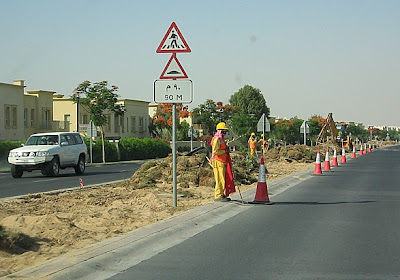 At least six workers are reported to have been killed in a construction site accident in Ajman.

There are seemingly conflicting stories about exactly what happened.

What is clear is that at the Laguna Beach Hotel being built on the Corniche Road in Ajman, concrete being poured for the basement ceiling collapsed onto workers below.

I would have thought that no-one should have been working beneath concrete being poured, but it appears they had gone down to check something, and that's where the facts seem to differ.

One version is that there was a leak while the concrete was being poured and the engineer told the workers to go down to check it.

Another is that the steel supports started shaking and the workers went down to try to fix them.

Police are said to be questioning several people, including the site engineer and a consultant.


You can read the stories, and see the extent of the collapse in the photos, in Gulf News and EmBiz247, here and here.
Posted by Seabee at 12:31 pm 3 comments:

Each time our beloved RTA clarifies the new car pooling regulations they confuse it more.

I quote from the story in Gulf New:

Our website for issuing carpooling certificates will be ready by the end of this month...

...people can drive their friends and colleagues to and from their homes and workplaces without fear of getting fines provided they get approval from the RTA...

...People can always carry their friends and relatives even without getting registered with the RTA...

...The purpose of getting the names of passengers registered for car pooling is to discourage people who run illegal taxis...


So what is the situation in the real world?

We are free to carry friends and relatives in our cars without pre-registering their names and without obtaining a certificate. But if we do, we're liable to be stopped by RTA inspectors and fined. Then, as I posted earlier, we have to go to the a committee which studies all such cases and cancels the fine of the motorist if they have been wrongly fined.

And another question I've asked many times before. Why does the media write this meaningless garbage? Why don't the 'journalists' clarify the situation before filing the story?


Read the story for yourself and see if you can work it out. It's here.
Posted by Seabee at 12:00 pm 6 comments:

I complain about Etisalat from time to time, with good reason, so I should also record when something is done well.

Yesterday evening I suddenly lost my connection - couldn't get to the 'net or e-mail.

So I called the help line.

First good point, I got through, it wasn't engaged.

The usual thing of a machine telling me which numbers to press to finally get to a human being.

A short wait, no more than a couple of minutes, because all the staff were 'busy helping other customers' and then I was talking to a helpful person.

He didn't jabber on in meaningless jargon, but quickly and efficiently ran me through the steps to take. That lead him to discover that the problem was somewhere at their end, they'd cut my connection somehow. (I expect someone tripped over a wire and pulled the plug out).

He said he'd get the engineers working on it and I should have my connection back within two hours.

In fact it was less than one hour.

The only part of the exercise I wasn't totally happy with was the call from the engineer to make sure I had the connection back.