I've discovered a treasure chest. Or to be accurate, a treasure plastic bag.


Full of stuff I didn't know I had, it was hidden way back behind stacks of other stuff in the dark depths of a large cupboard.

I've been sorting through it and I've come up with a selection of photos and some other bits that I'll share with you over a few posts.

A real find was an old vinyl 45rpm record, one that we played at every gig we had with our mobile DuneBeat Disco.

The cover is the fabulous 'Life in the Emirates', but inside it the disc was 'Back in Dubai'... 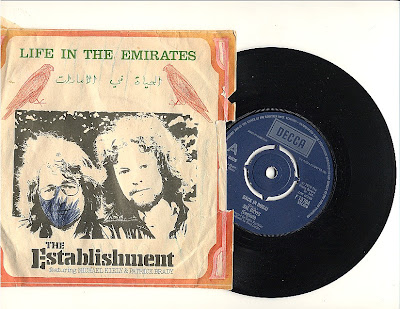 But I did find a copy of 'Life in the Emirates', on an old cassette tape: 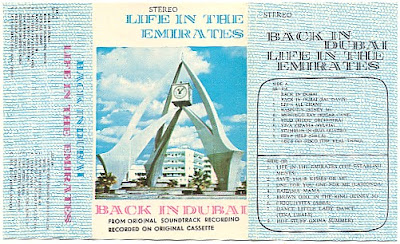 And there was another home-made tape, featuring 'Alex & The KayGee's, Live at the Cafe Royal, Dubai International Hotel'.


Dubai International was one of Dubai's earliest five-star hotels - it's still there opposite the airport but now changed to Le Meridien Dubai.

Back in the day it was the place to go. It had one of the city's first discos, Studio 7, and Cafe Royal, the fine dining restaurant. And it really was the best fine dining, with superb food and service and a big showband, which was Alex & The KayGees.

They started the evening with just the piano player, who was gradually joined by other musicians as the evening progressed. They ramped the sound up until eventually about fifteen musicians made up the big band, then the girl singers came on and finally Alex, the lead singer, with his big voice, big hair, big personality.

It was some show.

Here they are, with some of the Cafe Royal waiters. From memory, they were the first Filipinos to come to Dubai so they were real trail-blazers: 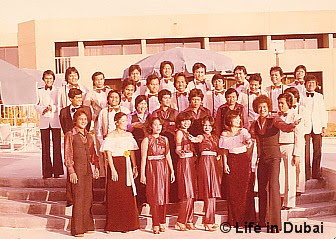 Cafe Royal was so popular that they couldn't fit in all the people who wanted to dine there, so on Thursdays they took the restaurant outdoors.

If you've been to the hotel you'll know it has nearly forty acres of landscaped gardens, and that's where they built a series of food stations, put down a dance floor and bandstand and had many more tables than they could have indoors.

Not a good photo but you'll get the idea. Dancers over on the top right, the bandstand just to the left of them: 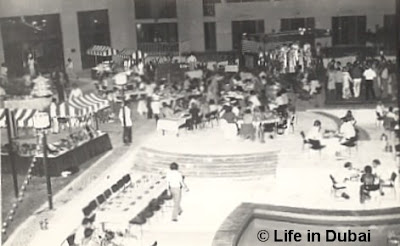 Those were the days.
Posted by Seabee at 5:37 pm 6 comments:

Three weeks in the UK and I've fallen into the habit of the weather being the first topic of conversation.

Our first week was warm and sunny, so was the third - in fact the Daily Telegraph ran a story last week headed "Heatwave to stay...with chance of 25C today"

But the week between was wet, cloudy and the temperature struggled to a peak of thirteen or fourteen celcius. But that doesn't stop the Brits stripping off if the sun comes out.

We were huddled in a coffee shop, hiding from the eleven degrees and howling wind that took it much lower, when several women walked by enjoying the sunshine dressed like this: 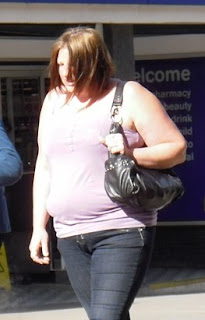 Later in the week in Devon the temp dropped even more. The car told us that in the afternoon it was eight degrees: 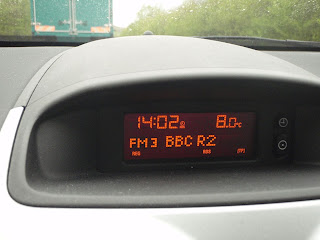 And a few minutes later, even though there was no sunshine, they were in T-shirts, shorts, thin blouses to enjoy the balmy weather: 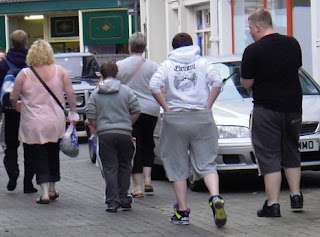 Last week someone said to me that people had been complaining about the cold since about November but a day of warm sunshine and they were already moaning about the unbearable heat.

I have hundreds of photos of our trip to sort out of course and I might post a few soon. More importantly, I found a bag of forgotten photos of Dubai back in the seventies so I'll be able to do a new 'Old Dubai' post when I've sorted them and enhanced the faded ones.
Posted by Seabee at 1:50 pm 4 comments:

The fog did NOT do it!

Sitting here in the UK on a crystal clear early evening I thought I'd have a quick look at Gulf News before we find a nice village pub for dinner.

The morning we left Dubai was when the latest multi-vehicle pile up was reported, a story that has legs, as they say. I found it still being talked about in today's online GN, proof yet again that criminally moronic drivers are not being blamed for our too-frequent road carnage in bad weather.


Not, you note, by terminally stupid drivers travelling at 140kph in 50 metre visibility.

I know I've gone on about this several times in the past but I really do need to keep repeating myself. What chance is there of ever changing these driving habits when those responsible for the carnage are excused because it wasn't their fault, it was the fog's.

The crash, the death, the injuries were all caused by the drivers.

The drivers, not the weather.

And now for something completely different.

Something that's intrigued me for a long time has to do with racing camels here in the UAE.
Very big, camels.
Big, clumsy and weighing over half a tonne.
So why were the jockeys very small young boys, replaced when it was acknowledged that was an unacceptable practice by even smaller robot jockeys? 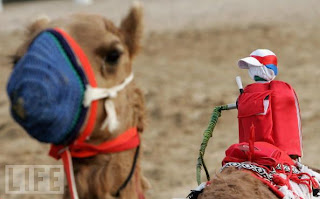 Photo life.com
This makes much more sense to me, as we do it in Australia, where we have huge herds of wild camels by the way, with a proper grown-up human jockey: 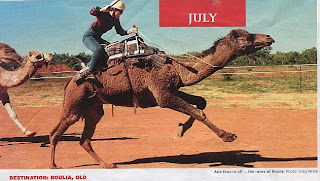 Photo Greg White
It's a rhetorical question, I'm sure there's no logical answer.
BTW, the pic is from Australia's richest camel race with A$30,000 in prize money (Dh110,000), held every July way, way, way out in the bush in far western Queensland. It's about 2,000 kilometres from the state capital Brisbane.
Just a bit of background, that gives an idea of the vastness and sparse population we enjoy in Oz. Boulia Shire covers a land area of 61,176sq kilometres and has a total Shire population of just 600 people. That's four times larger than Greater London, which has eight million people.

So there's a lot of empty space.
It fills up a bit for the camel races, when about 2,000 people turn up.
And of course, it's empty apart from the 250,000 sheep and 75,000-plus cattle that are usually around the shire. The wool clip is approximately one million kilograms weight. Yep, a million kilograms.
They say the largest employer in Boulia is the Shire Council, the main role of which is the maintenance of the roads within the Shire.
I'd say there's not a lot else to look after really.

And on that camelian note I'm disappearing for a while. We're off to the UK in the morning for three weeks.  Not sure whether I'll be posting much for the duration.

Boulia Shire Council has a website - a very good one actually - that you might be interested to look at to get a glimpse of a very different lifestyle. It's here.   Info on the camel races is under 'Events'.
Posted by Seabee at 3:34 pm 3 comments:

More on the law

I was going to post about this earlier in the week but decided to wait for more information and for the muddy waters to clear. It's still all very murky but we know a bit more now.

Sadly it's another in a long line of victim jailed cases such as I posted about a few days ago.

Back in Australia there was a hearing in Brisbane Supreme Court on Friday of last week when lawyers acting for a young Queensland woman, Alicia Gali, were given leave to sue Fujeirah's Le Meridien Al Aqah Beach Resort for breaching its workplace obligations and failing to have systems in place to protect their workers against assault.

That opened a can of worms.

On Monday it was in the news, with headlines like:

Drugged, raped, then jailed for 'adultery'
and
Queensland woman tells of her jail hell in United Arab Emirates

The details are murky but it goes back to 2008, when Alicia reported to police that she had been raped by three co-workers at the hotel after they spiked her drink in the hotel staff bar.

It seems the three men were not charged with rape but they and Alicia were found guilty of illicit sex, and presumably consuming alcohol.

Alicia got a year in Al Slammer and served eight months before being pardoned.

She claimed she had no assistance from her employer or the embassy, which the hotel immediately denied. They issued a statement that they had helped 'including assisting with medical support, arranging for financial support, assistance with the investigation, liaising with her representative embassy and arranging for her family to come to the UAE from Australia'.

The following day her lawyers refuted those claims.

I told you it was all very murky. It'll get worse as the case progresses too with the international spotlight firmly on the laws here and the way they're administered. Let's hope it brings about some changes.

BTW, if you read the stories I've linked to below you'll see they contain warnings against travelling to the UAE. The only news outlet here I've seen the story in is Arabian Business, who simultaneously reported a UK survey in which Dubai came fifth in a survey which asked travellers which destinations they felt most at risk in.

That's strange about a country that's one of the world's safest, but it's not safety in relation to muggings or violence against them they're concerned about. It has to be the regular reports of people being jailed for consuing alcohol, for verbal insults, for giving the finger and of victims being jailed that cause the concern.

Dubai not safe survey.
Posted by Seabee at 6:38 pm 7 comments: