That won't ring true to Dubai's boys in blue, the thousands of labourers building the city - and the cleaners, retail assistants, drivers, gardeners, teachers, nurses, office juniors and all the others who keep it going.

But, mainly because the UAE gets a high ranking, HSBC's survey of expats has been given a lot of media coverage.

In what's claimed to be the world's largest expat survey, they had response from 2,155 expatriates across four continents about the opportunities and challenges that come with a life away from home.

What I can't find is who the respondents were.

Pretty obviously though, the results are referring to western, management-level expats and as we know in Dubai that's a tiny sample of the global expatriate population.

According to the results, while half of expats spend more on food, shopping and socialising in their new country of residence they also save and invest more than they did in their country of origin.

While I was reading the reports an e-mail arrived from a friend about the effect of Dubai's inflation at street level. It also shows how unrepresentative the much-publicised survey is of most expatriates.

Ten years ago my friend started using an automatic car wash, where 5 guys dry and vacuum your car afterwards. In 1998 it cost Dhs 15, in 2001 it went up to Dhs 20 where it stayed until 2006 when it went to Dhs 25. Because of Dubai's rents my friends moved to Umm Al Quwain and hadn't used the carwash for a while. Yesterday they did and the price is Dhs 35.

I commented to Suresh (one of the cleaners that has been there since 1998 at least) about the high price.

He tells me "Yes, madam. Everything too much expensive now. After Diwali this year I will return home to my family. There in India I can work as a driving instructor and earn a better salary than I earn here (at the car wash he earns a basic salary of Dh950, with approx. Dh200 in tips every month) and I only work 8 hours (and not 12 hours like in Dubai) and my family is there.

I need to make savings for my children's education and I cannot do that here in Dubai. Now with the new visa laws, it will also be very difficult to bring them here, even if I stay and get a better job."

She related this to a colleague. He had a similar story.

From when he arrived in Dubai three years ago, cleaning and ironing a shirt cost Dhs 7. When he picked-up his shirts yesterday he was told that they now cost Dhs 11. The friendly attendant who knows him well apologized and said that next month they'll be Dh13, and not surprisingly "customers are leaving us now".

"For me also, there is no more reason to stay in Dubai. I am going home to Bangladesh, there I will work in a call centre, I earn the same salary as here (Dh1,400 a month) but I only work 8 hours a day (and not 10 to 12 hours at the dry cleaners). There, I can live with my family and make many savings."

And my friend makes an interesting point:

Everyone talks about the "Brain Drain" in the GCC… of highly educated Arabs seeking employment in the West. What about the "Muscle Drain", i.e. all the service staff like waiters, delivery drivers, store attendants, etc. etc. etc. who can no longer afford to stay here?

Dubai is far from unique in becoming too expensive for the essential lower-paid people to live in, cities around the world are struggling with the problem. But we need so many more than most cities because of the frantic construction and expansion, so solving the problem is more urgent here.

Back to the survey and a sample of the headlines: "The United Arab Emirates is the most luxurious place for an expat to live" and "UAE tops in providing luxury to expatriates" and "High salaries pull in expats".

Unless you're a highly paid western managerial expat, you might want to treat them with some scepticism. 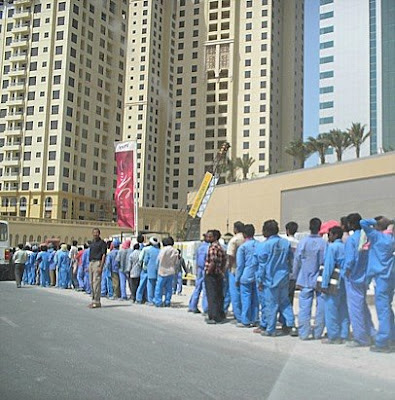 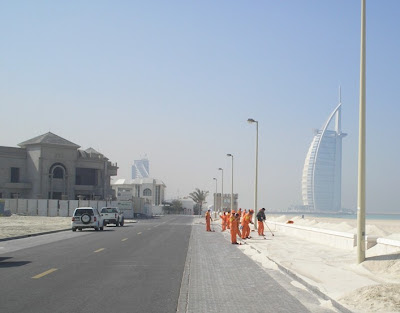 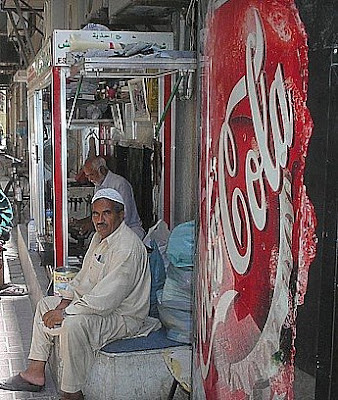 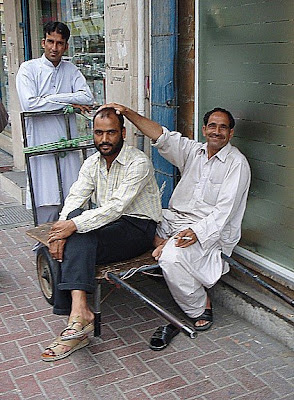 Gulf News report is here.
The survey is here.
Posted by Seabee at 1:30 pm

Seabee, absolutely spot on and oh so true.....

there was a debate on this issue on arabianbusiness. the best answer came from a lebanese sycophant who claimed that Dubai is much better than NYC London etc


Yes, I discovered that a long time back after a very thorough research. Yes, it's the highest standard of living for all. I am just a Senior Executive from Lebanon and i can feel the difference when i visit my other friends living in Europe or USA or Asia or even other GCC countries. Whoever does not like UAE should leave immediately (today rather than tomorrow). Yes, it's incredibly expensive but overall the standard of living is second to none. Even my friends in Japan, New York, London, Paris envy me. They have been to Dubai and they know how to compare very well. There are rich and middle and poor everywhere. Obviously, education, profession, experience, exposure, personality, and etc... play a major role in shaping your standard of living. Naturally, locals should be the 1st beneficiaries of any country's wealth. It's the case in Iceland, NZ, Sweden, Canada, Brunei, Denmark and all over. Stop envying the nice Emiratis and work on improving yourselves. Canadians enjoy their extra generous welfare system, and many other people in different countries.

One day we'll look back in history and find your blog.

if thing will be like that suerly many Operational ppl who earned around 1000-3000 dirham will leave...i knw many indians who owrked here as cleaner jobs are leaving at bulk.

Thing's are getting tough worldwide. Starbucks is withdrawing most of it's operations in Australia, cutting some 700 jobs...

LDU I read those reports. Sad for the staff who'll lose their jobs, but it was always the probability. Trying to set up Starbucks in a society with such a strong Italian-style coffee culture was never going to work.

I could never understand Starbucks. Too many 'choices'. All I want is a coffee with milk, or an espresso. Simple no?

Anon (whomever you are). You claim the letter included in your blog is the "best answer" so I am presuming you agree with it.

But you fail to understand part of Seabee's initial post which is questioning the authenticity and accuracy around the survey being published.

Mistakenly you also quote Arabian Business which at times is nothing more than a glorified press release for the Government here.

This survey is getting lots of publicity because it is favorable to the UAE. Nothing more, nothing less.

How much publicity did a similar survey from 2007 get when the UAE was voted right down at No. 65 when studying which countries were expat-friendly with respect to employment, visa's and associated laws? Not much I hear you say.

As far as standard of living goes, the letter you quote is from one citizen from a volatile country who happens to have mates that think he is doing okay. It is the standard of living of the majority of the population that shapes the entire country's, not just the minority as is the case here in the UAE. You can twist a survey to gain the results you want (e.g. Zimbabwe would rate really highly too if you only surveyed Mugabe's entourage..)..... get it?

And as far as the letter writer saying "If you don't like it, then leave" I am so sick of this stupid statement as many responsible people have committments such as employment, family, time duration contracts (etc) that may make them remain in a location longer than desired despite its flaws. Meaning they can only leave when the time is right.

Anon, get out of your bubble and look around you at the majority of the population here, because something tells me you would believe anything.......

i never take surveys at face value. anyhow, i read somewhere that while we are getting more luxurious and that rates are inflating, we've dropped down the list for the world's most expensive cities...there's a mistake in numbers surely.

Excellent post. I eagerly accessed the survey via your link, wanting to know where KSA fitted in. Big surprise, it doesn't! So, when all you expats in the UAE are complaining about things there, just spare a thought for us, expats in a country where life sucks too much to even qualify for inclusion in the survey!!!

Nicely nailed to the post, Seabee. Funny, it all seems a little surreal reading that from the perspective of a warm summer's day in the UK!

a warm summer's day in the UK

Not an oxymoron, Alexander?

Well - how about a warm summer's day in Iceland?

Temp's 24-27C at the moment and the locals are dying in the heatwave!

This survey is BS. Am sorry, but that is a fact!

I visited Dubai this weekend. I am not able to relate the claims and publicity made abouts its success story with realities at ground. It is a city full of sufferings and human right voilations. It was phatetic to look into life of well to do people who struggle for things which are easiily acheiveable in other middle eaast countries. The infra structure and planning is really poor. The coordination between different emirates is non existent.

There is a serious need of consideration of low income housing. A good public transport system is essential and cannot be delayed further. The system seems crippled

I gotta repeat what they said, an excellent post.

The thing is many western countries get the "muscle" workers by getting students/teenagers to work part time in some of those shops. Good luck trying to get Emarati teenagers working even in retail! Its the same in other parts of the middle east.