This happens far too often... 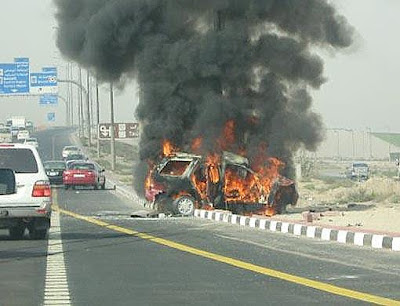 Another crash, another vehicle bursts into flames.

I've said it many times before, vehicles crash - including at high speeds - in other countries but they don't seem to burst into flames as they do here.

Do we not have adequate regulations about fuel tank safety?

And on the road safety subject, statistics reported by Dubai police show that our road deaths are going up. There were 147 people killed in the last six months, an increase of 8% over the same period last year.

Think about it, it's person being killed almost every day.

The stats also show that 1,688 were injured in 1,914 crashes in the last six months. That's about ten a day, every day.
Plenty of talk, plenty of hand-wringing, plenty of promises, but the situation is getting worse.


The stories are here and here.
Posted by Seabee at 3:42 pm

i always wondered about the flaming cars...

Do the victims ever make it out?

LDU, this one was pulled from the car, badly burnt of course.

Many of the people caught in vehicle fires don't get out though, and are not killed by the crash itself but by the fire.

There have been awful reports many times of passers-by trying to get trapped victims out of burning vehicles, being beaten back by the fire and just having to stand by helplessly as the trapped people are incinerated.

Hey, this looks familiar... is that the Emirates Road, right opposite the Tamweel Car place? The flyover that goes over the Sharjah airport road? I drive there every morning (thankfully I'm there really early in the morning, when most of the speeding idiots are still asleep). I just hope that something changes on the UAE's roads, soon... for all our sakes.

sorry, I meant Tasjeel of course (with all this real-estate-property-talk, I don't know where my brain is anymore!)

I'm not justifying the idiocy of driving here, but I do think manufacturers have a lot to answer for - brake fluid, for instance, is highly flammable and the container isn't well anchored or protected in many cars.

The worst one I ever saw, personally, was long time ago, though: a car hitting a truck smack on the fuel tank. Both were consumed by 30 foot flames within seconds. Nobody got out...

ZTG, yes that's exactly where it was.

Alexander, that's what I've been asking for a long time, whether we have lower standards than other countries. The positioning of fuel tanks, protection of all flammable liquid containers/pipes etc. I know there are strict regulations in Europe and N. America....but here?

But Seabee, do you think that they (manufacturers) would go to the trouble to spec the cars differently for this market? Is it big enough to warrant that on a global scale?

Being that all cars are imported surely they would be same standard, wouldn't they?

There must be something different about cars delivered to this part of the world. Here in KSA, all the cars have cassette players and no CD players, and we're talking brand new, current model vehicles. I don't know how common cassettes are in other parts of the world, but in Australia, cars come with CD players! and you can't buy cassettes any more! Also, if you want to ship a car to the UK or back to Oz, there are enough modifications required to bring vehicles up to standard to make it not a viable financial option to do so. That would lead me to believe that cars made for the Middle East market are done on the cheap, with lower standards for everything. Good for the manufacturer, high volume, low manufacturing costs, easy sell to people with insufficient safety legislation. In addition, here in KSA at least, the insurance industry has really interesting ideas about what constitutes safe repairs. A friend of ours had a car accident recently and totalled his Subaru. The insurance company rejected the quote from the Subaru repairer as too expensive and went with Dodgy Brothers down the road. The front of his car was removed, the undamaged front of a different wreck (including the front half of the chassis) was welded to the back of his car and the insurance company refused to replace the airbags as they were too expensive. No wonder every time there's an accident people die.

Dave, as Kathryn has suggested, cars do have different specs for different parts of the world. Here we have Gulf Specs for example, mainly to do with cooling systems. The Chevrolet Lumina is actually an Australian Holden Commodore - badge engineering plus moving from right to left hand drive. Cars have or don't have A/C fitted for various markets, different sound systems etc etc.
And of course the production lines have all sorts of different versions of each model going through, so putting in cheaper parts is simple.

I purchased a used car couple of years ago. It was imported from Japan. When I went to register it in Sharjah I was told that this car is not as per GCC standards. I questionned what are GCC standards and was not informed of any thing but was simply asked to visit an office in Dubai, I dont even remember now the name of office, any how I went there thinking that I will now have to transport the car to some place to get it inspected and then install some items as it would require and then I will be able to register it.

I was wrong, a complete idiot, because that office simply charged me AED300/- though through e-payment and that I had to do another 3 miles away in another office and come back to them because they did not have any e-payment cards available that day, thats it after charging me money they issued me a certificate and told me to show that certificate to the traffice department.

I went back the next day as it was already 2 pm and Sharjah plice does not work like their counterparts in Dubai and got my car registered.

So the standards can merely be met by paying a bribe to government directly. Yes I will call it a bribe not a fee becasue fee is paid for a service but this is not a service. That was just a mocery of a system and standards.