We were in a small private hotel in a village in Provence, which had a small library for guests offering twenty or thirty books.

Rummaging through them I came across one by Bob Woodward, the investigative reporter who broke the Watergate scandal. The book is 'Veil: The Secret Wars of the CIA 1981 - 1987' and it's a good read.

But the reason for posting about it is what was on the front cover: 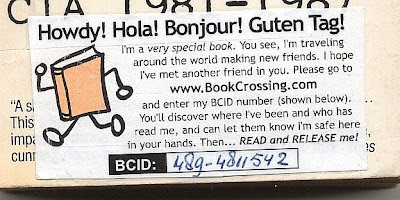 What a great idea.

I'll quote from a flyer inside the book.

"...BookCrossing.com encourages people to experiment in what it terms 'the karma of literature' by registering books at the site and then depositing them in public places like coffee shops, airplane seat pockets and park benches.

Finders are not encouraged to become keepers. 'We call it read and release' says co-founder Ron Allen Hornbaker. 'It gives people a way to share their books without feeling like they're losing something'.
Posted by Seabee at 1:22 pm

I love this idea. Thanks for sharing, I would never have heard about this.

CG, anyone can join up, register a book and put it somewhere to be found. Check out the website for details. Maybe we should all do it, I'll certainly pass on the one I picked up and I'll probably add a few more.

This made me giggle. Smart.

I will now go away and play with this really rather brilliant scheme!

Alexander, it made me smile too when I read the stickers in the book, it's such a lovely idea.

I found out about bookcrossing from a bookmark left in a library book. members: 689,162
books registered: 4,905,872
good karma: priceless
So nice to have you with us.

I always leave books behind when I travel, and frequently leave my email address in the front cover in the hopes that someone will let me know they've taken it up an enjoyed it.

This is a much better idea -- I'll have to sign up!

BookCrossing is a genius idea, and as an active BookCrosser for going on two years now, I can attest to the fact that it really works. Books do travel and connect people. :-) It's great that you've joined, I hope you will become an active BookCrosser and help spread the love of reading!! :-)

There was a similar idea years ago in the US where someone had a note like this on 1-dollar bills.

The site was "www.wheresgeorge.com" (that's George Washington, whose face is on the note), and it was pretty cool to trace how the money you had with you right now had travelled all over the country.