I planned to post about a story in today's Gulf News (which I'll get onto in a minute) but the proudly trumpeted new web portal has tripped me up.

They have a double page in the printed paper with plenty of people involved in the new design telling us how wonderful it is.

Here's how wonderful it is from a users perspective.

The story I'll get to shortly is the lead on page 2, so they obviously think it's of some importance: 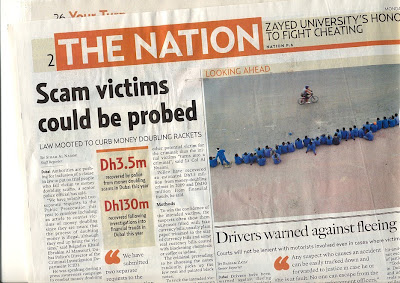 As always, I want to give you a link to the full story but their sparkling new wonderful better-than-ever web site doesn't have it.

Inevitably the new design makes it harder to find stories than did the design it's replaced. This story isn't there anywhere though.

I've looked at all the relevant pages. Not there.

I've put everything I can think of into the search engine and every time I get: Sorry your search did not find any results.

The stories are also all over the place, out of date, no longer news.

For example, under 'Environment' the lead story is "Public warned against exposure to dusty weather." It's a story dated August 1st.

Like so many new web page designs it was both unnecessary and is much harder to navigate than the original. Why is it that so many companies can't resist the urge to do it?

GN, scrap it and re-instate the design you've just dumped. It looked better, it was more user-friendly, it was up-to-date and relevant.


Anyway, to the story, which is about an interesting departure in the way we're used to laws being written.

It quotes the Dubai Police CID Director as saying that they want victims of money doubling scams to be prosecuted.

Of course 'everybody knows' comes into it too: "...to convict victims of money doubling since they are aware that the process of doubling money is illegal."

The process of doubling money is illegal?

The jails should be full of property speculators, investors, businessmen...

Apparently the proposal has been under discussion for many years and the Brigadier believes a law for charging the the victims will soon come into effect.

Back to the drawing board on this one too I suggest.
Posted by Seabee at 12:10 pm

The issues you've talked about on the GN site appear to have been resolved now. Then again, it wouldn't be the first time a project in Dubai has been rushed and unveiled to the public before it's ready.

Par for the course, Doug. Sadly, they never learn. Huge publicity, this is the best thing ever, launch it while it's still in the development stage.

And their feeds dont work, esp with the big hooha that they made about it, you cant even get any. as you said seebee - if it aint broken...

I truly hate the new GulfNews website format... ewch! Horrible and not very user friendly at all. Will probably start reading "The National" online instead now. Oh, and then there's my favourite of course: "Arabian Business Magazine" :-)

Let me go against the trend a bit... I actually think the new design of the GulfNews site is quite good. It does a good job fitting the information in a much more organized way than before with the sections clearly labeled. Also I think it uses colours in the menu items in a good way, highlighting which section you are reading. It also manages to use more of your screen real-estate (going for a default 1024x768 pixels size).

I agree with you about launching something that's not ready. That's the usual Dubai story, but I wouldn't go all the way and dismiss the whole thing.

Catalin, it's not so much unready as plain badly designed.

For example, as I've said in both my posts about it, most of the current day's stories are not on the site while old stories from the past dominate it.

I think we're talking about two different things. While I take your point about the website having lots of technical issues (old stories, bad links etc.) that doesn't really have anything to do with the way the information is displayed (from a pure design point of view). That's where I think the site is better than the old one.

Trouble with design is that it can be very subjective. Technical issues are easier to be either black or white. :)

Even if we're having different opinions on this one, I still enjoy reading your stories :)

Very true Catalin, design is subjective. Putting aside the problems with the site, and the useability, while you prefer the new design I think the old site was better visually.

It's also true that the design of something which has to be used, such as a website, has to be practical. I thought the old one was well organised, simple to get around, easy to find things. Even if there were no problems with the new site I find it much more difficult to navigate.

Outwardly, the website looks alright, but try going deeper and you'd be more lost than you'd be in a labyrinth. The malaise has spread to the Express and Wheels websites too. They are now as terrible as the GN site.