You'll recall the confident predictions, from sections of the British press in particular which was gleefully repeated by people living here, that the economic meltdown would destroy Dubai.

With absolute certainty they insisted that Dubai would rapidly become a ghost town, abandoned by its expats and reclaimed by the desert sands.

The hysterical reports told us there were three thousand cars abandoned at the airport by fleeing expats. Hundreds more maxed-out expats were sleeping at the airport and in the desert.

But worse was to come because tens of thousands more would flee at the end of the school term.

All absolute nonsense of course.

Thousands of cars were not abandoned at the airport, there were not hundreds of homeless, jobless, maxed-out expats living in the airport or the desert.

And the thousands who were only staying so that their children could finish the term's schooling, well, they're still here.

We're at the start of the new school term and the schools are still full.

Many more roads have been completed but the traffic is still heavy - and chaos when there's one of our regular crashes.

The cafes and restaurants are still doing good business as people still eat out.

In a post at the beginning of December I said I thought there would be an upside to the downturn, that it would force a pause in the frenzy of development, allow for better planning, allow time for infrastructure to catch up.

A downturn and slowdown yes, a ghost town no.

I've posted many times that the predictions of Dubai's collapse were gross exaggerations with no understanding of its history. The evidence I see backs me up.

Plenty of traffic this morning in New Dubai around 10 o'clock after the peak... 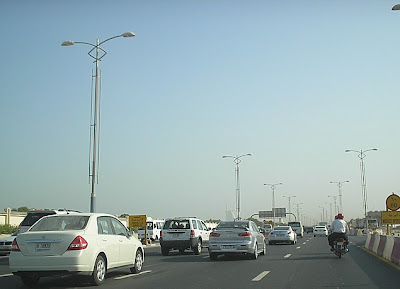 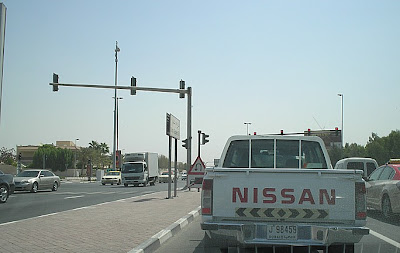 And there was no evidence of a ghost town at The Walk at JBR early Friday evening... 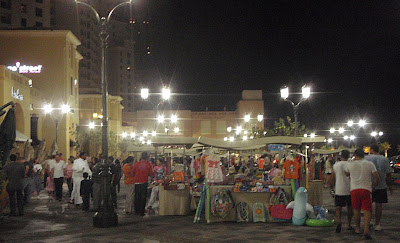 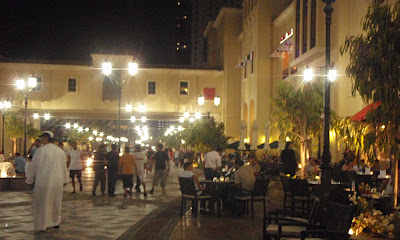 I'm not holding my breath that the writers who made those confident, often spiteful, predictions will bother themselves with a retraction.
Posted by Seabee at 11:33 am

No doubt that the ridiculous reports were exagerated on many levels and there are still plenty of people in Dubai. But as you accurately point out there is indeed a slowdown, not a mass exodus.

One school teacher I know has also told me that their class sizes, coupled to the number of teachers, have also decreased creating the perception of "full enrolment". When in reality they have less kids than last year.

The impact has also been severe on the housing rental & sales market. Whilst some refer to the declining prices as more of a "correction", I believe that market forces, caused by the reduction in population and over-supply are the main contributors. Proof if you like that the decrease in population was not a vision perceived by the leaders, and certainly not in the overall game plan..... and not just caused by the credit crunch....

Dave is right, decrese in population was always a secret to tell and a shame subject to talk about by the majority who does the extra respect in there talks about this special desert metropolise... as if they will be tortured for there talks...
I don't think it is only the history of Dubai and how it grew which determins if it will become a ghost town or not, it's the mix of striving (to improve and enjoy) people that make Dubai; and west will to have another city in the middle to serve as good as Singapore, Hong Kong and Kuala Lampur as a trade hub and a threat location for the Iranians who are anti west today.

On the point of the schools, less new teachers were taken on, and many of my friends have seen their teaching loads increase. Music and PE has been reduced in some schools giving the class teacher a heavier workload. Schools might be 'full', but numbers have gone down.

Have to agree with you there. The doom mongerers painted a morbid picture back in February....

What about the amount of people who have 'done runners'? I know 5 personally and these were'nt small amounts of money either. Thing is, we will nneveer know the real picture.

In my sector, things are picking up after the summer and ramadan, so a bit more positive after all the negativity this year.

Dubai, like many other places has had it tough....but the UK is not much better with employment shooting up (also look at US) and apparently another credit crunch scenario as millions of people, maxed up to the hilt on credit/cards, start to default on payments.....

Dubai may have not turned into the ghost town hat was predicted by some of the Western press, but that does not mean everything is 'hunky dory'. The pictures posted by the original poster is a lame attempt at trying to show everything is normal. For those of us who have lived in Dubai before and after the downtorn know full well that these pictures are a shadow of what Dubai was at it's peak. There is no grid locked traffic in Dubai at rush hoour anymore. The traffic during peak hours along SZR is always moving and getting from say the Palm to Deira is a 45 min journey now whereas it usedto be nearly 2 hours in the past. Additionally, te abandond cars from the airports have been removed and parked near the Police pounds. Has anyone seen the Police pound near the Mall of the Emirates? Just look behind the Police Academy and see how many abandoned vehicles are stored there. Additionally, ask any bank for it's vehilce auction list and see what you get!

The reality is Dubai is a ghost town compared to what it used to be and I doubt it will ever recover. All the reports that you read inside the UAE are regulated as there is no freedom of press or verification service in the country and it is all owned by the Ruling elite. One will never know the true picture, but for someone who has lived in the UAE for the past 6 years, Dubai has changed and is definately much worse off now than it was 1 year ago. Other countries are pumping stimulus packages worth billions of dollars into their economies and Dubai cannot even cover approx $90billion. 1 year from now Dubai should change it's name to India as these will be the only people left here. The rest of us from the West have gone home.

"The pictures posted by the original poster is a lame attempt at trying to show everything is normal."

Anon@5.49, typically, that totally misrepresents what I said, which is that there's a downturn, a slowdown, but it's not a ghost town. It's typical of the stupid comments about Dubai being destroyed, reclaimed by the desert, being a ghost town, that was the subject of the post.

"All the reports that you read inside the UAE are regulated as there is no freedom of press...One will never know the true picture"

So you believe we only have access to the local media and therefore don't know what's going on. Are you unaware that we read the international media, listen to international radio, on our computers?

"Dubai has changed and is definately much worse off now than it was 1 year ago." Brilliant insight! Tell me acountry that isn't worse of economically than it was a year ago.

"1 year from now Dubai should change it's name to India as these will be the only people left here. The rest of us from the West have gone home."

Just the sort of hysterical nonsense I posted about. Tell you what, let's make a date to meet back here in one year and confirm whether Dubai has no expats other than Indians.