There's a new film on YouTube showing innocent motorists' lives being endangered by a bunch of brainless morons.

On Sheikh Zayed Road in Dubai, a 4x4 and a pick-up doing stunts while other traffic is around them.

Some stills from it: 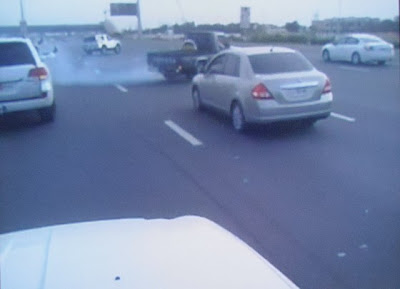 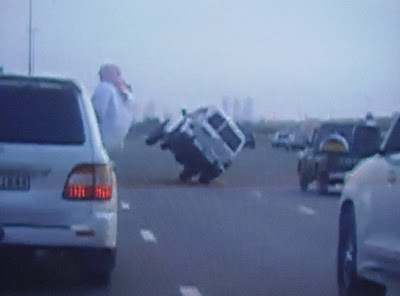 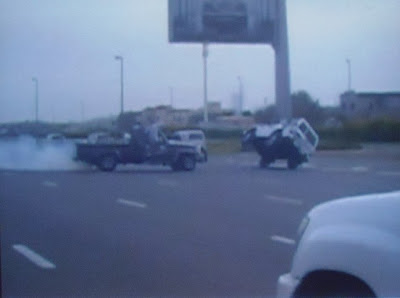 Dubai Police are efficient enough to identify the Eastern European ram-raid gang and to get massive amounts of information on the hit squad that assassinated Hamas commander Mahmoud al-Mabhouh.

Identifying the idiots in the clip should take the police about five minutes.

Deliberately putting other people's lives at risk like this deserves a lifetime driving ban, a lifetime ban on owning a vehicle and a lengthy jail term. And I mean lengthy.

The obvious question is whether they'll be arrested. Cynics will doubt it and will talk about wasta...
After you've watched the clip here you'll probably prefer to use the Metro rather than driving.
Posted by Seabee at 4:01 pm

I love this video!!Shows the most skilled drivers we have here in dubai.NOT

The only thing missing during such stunts is a bunch of camels running alongside these bedouin rides.

This video has to go down as the most outrageous driving antics of the decade!!

its not fun, its danger

The only thing these lunatics will get is a warning...that followed by a hug and a pat on the back for doing such awesome stuff on SZR... *sarcasm*

Front page of the eminent 7 days newspaper on Thursday and also mentioned in The National (but, apparently, they closed their registration for comments service).

This isn't the first and nor will it be the last example of d!ck-sh!t driving. There was another you ... tube vid a week or so ago of something similar on Beach Road.

Oh, and by the way, the link you posted now comes up as, surprise, surprise,

hnd I've just clicked on my link to YouTube and got the 'This site is blocked' message.