Here's the review that resulted in a blogger being sued for damages: 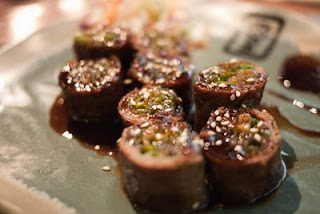 A few days back I posted about Benihana opening up at the Avenues and yesterday night I decided to pass by with Nat and try it out. The service wasn’t too bad for a restaurant that’s just been open for a few days and the staff were really friendly. The restaurant itself is made up of islands and bars with a grill in the middle of each one. You sit around the grill and the chef will come to your table and prepare the food right in front of you which makes things entertaining. It’s actually why I prefer sitting at the bar in Japanese restaurants in general, since you can talk to the chef and watch them put your dish together. The problem with my experience last night though was with the food, it was disappointing to say the least.

We ordered beef negimayaki for starters followed by an Orange Blossom maki and a Hibachi Chicken. The negimaki arrived looking good and was probably the best thing we had there even though I prefer Maki’s negimaki which has a richer teriyaki sauce. The Orange Blossom was very ordinary, wouldn’t order it again. Now the Hibachi chicken which is basically grilled chicken, that was the worst. The chicken was very chewy (I could swear it was undercooked if not raw) and tasted terrible. Even after I had the chef add some more teriyaki sauce in hopes of improving the taste it didn’t work. I tried to dip it into the sauces that came with the chicken but it was hard to figure out if they were actually making things worse or not. Nat only ate one piece of chicken and left the rest while I needed my protein since I’m on a strict diet and forced myself to eat my whole plate (I can do that) but the after taste was really bad. Even the rice and the veggies that came with it tasted bad AND were under cooked. Once we left I considered picking up a frozen yogurt from Pinkberry even though I hate frozen yogurts but I just needed something to get rid of the aftertaste. A few moments later we ended up at Chocolate Bar ordering the gooey chocolate cake (bye bye diet).

I shot the two videos above of the chef preparing our meal. Benihana are known for the live shows they perform when preparing your dish so I was expecting to see [This] but ended up with the above . Would I go back to Benihana? No I wouldn’t. Their sashimi and maki’s are pretty cheap (KD1.5 for 5 pieces of Salmon sashimi for example) but there are two other Japanese restaurants at the Avenues, Wasabi and Maki, and I would prefer either one of those to Benihana.

There won't be many internet users who aren't aware that Kuwait-based blogger Mark is being sued by Benihana Kuwait for writing that review of his experience in their restaurant.

In spite of universal negative reaction, franchisee Benihana Kuwait is continuing with its legal attack. The franchiser Benihana of Tokyo has taken the decision to hide and pretend it isn't happening, isn't damaging their brand.

Benihana Inc, a separate company, has spoken out, issuing a press release distancing themselves from the debacle, saying they welcomed customer feedback and advising people to 'share your comments and opinions directly with Benihana of Tokyo, Inc'.

I originally posted about it here, under the heading 'Sued for saying he didn't like his meal'.

I also said in an update post that it was a balanced review and along with many other bloggers today, I'm reproducing it.

The reason this is being re-posted today by many people on various internet platforms is to continue to draw attention to the attack on freedom of speech.

There's nothing in the review to warrant such an attack.

Read the blogs, the tweets, the Facebook comments - the damage to Benihana is being done by the actions of the Kuwait franchisee and by Benihana of Tokyo themselves by their silence.  Just google benihana kuwait or on Twitter look for  #BenihanaKUW to see what's being said.

Benihana can begin to repair the damage they've created for themselves by announcing that they are dropping the legal action.
Posted by Seabee at 11:03 am

I have complained to Benihana Tokyo about this and they haven't even had the courtesy to respond.

I guess we need to boycott Benihana globally to make them pay attention.

The reason this is being re-posted today by many people on various internet platforms is to continue to draw attention to the attack on freedom of speech.

Wasn't there a prominent blogger in the UAE called Secret Dubai Diary who was censored by the UAE government a few years ago? I can't recall the same attention being drawn to this by bloggers at the time. But then SSD wasn't a restaurant critic was she? And she was being silenced by the state not the franchisee of a multinational company. So really not the same kind of thing and not so worthy of comment.

Alvarez, yes SD was and still is banned, but that was a very different situation. The ban was because of a post with serious accusations made against people. There's no comparison with a simple restaurant review.

I have complained to Benihana Tokyo about this and they haven't even had the courtesy to respond.