News that Dubai malls are becoming active in the issue of what visitors wear has created a bit of a stir. 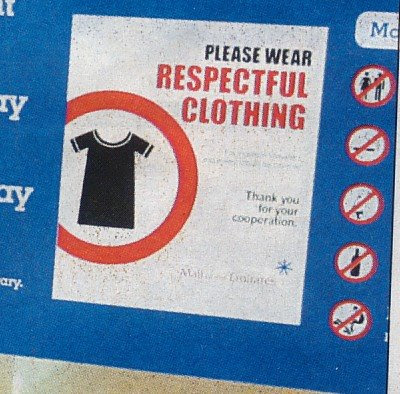 The Gulf News feature calls it an 'anti-indecency' campaign, which in my opinion is misleading and that's what's caused a lot of the comment.

There's also the use of 'respectful', also not the right word in my opinion, and it's all exclusively about the way women dress.

But that's only half the story.

Go to, for example, Thailand and visit temples as most tourists do, and conservative clothing is required. I don't see any debate about whether that's right or wrong, or people insisting that 'nobody can tell me what to wear'.

In this area it's inappropriate for women to wander around the city or malls in hotpants, mini skirts, low tops.

But as far as I'm concerned it's equally inappropriate for men to wear beach clothing in cities, malls and restaurants. Not just here, by the way, but anywhere.

For example, we were having dinner in a restaurant the other evening. Nice restaurant, tablecloths, waiters in formal uniforms etc. At the next table were two young men in thongs, football shorts and singlets. Totally inappropriate - and the restaurant was at fault for allowing them to dine in their beachwear.

It's hot outside? That has nothing to do with it. You're in an air-conditioned restaurant or shopping mall, usually at an uncomfortably low temperature.

What's appropriate clothing in Dubai is not a new issue by the way. People who've been here a while have always known what was appropriate. There was no need for guidance to be issued by the authorities, no need for coverage in the media.

That all changed with the big boom which started six or seven years ago.

Hundreds of thousands of new people arrived together, they didn't mix with the old hands, they simply brought their own standards with them and ignored the local culture.

Added to that is the influx of millions of tourists, again with little thought for the local culture.

Dubai's authorities and tourism industry must share a large part of the responsibility. They thought only of the commercial benefits and didn't anticipate what else the huge influx would mean.

They've allowed standards to be ignored for the last several years and now there's a predictable backlash from Emiratis, concerned that they're being swamped by the influx of foreigners, that their culture and standards are being lost.

So now, several years too late, there's action being taken to try to re-establish standards.

The backlash is not unique by the way, the same complaint is made by people all over the world about newcomers to their country. Think of the UK, Germany, France, Australia for example, where there are complaints that immigrants don't fit in, don't assimilate, and there are campaigns to stop immigration.

People arriving here say that they weren't aware of the dress code, and that argument has some validity.

But there's also an arrogance about people, with examples given in the Gulf News feature.

Tania N. a 29-year-old Russian businesswoman, said she got confused when a security guard at the Mall of the Emirates handed her a brochure on how to dress appropriately.

"I respect Dubai, its religion, culture and people, I come here frequently for business and pleasure...I used to wear a sleeveless short gown or miniskirt and according to my background it is a decent outfit and doesn't cause any kind of embarrassment.

Asked whether she will adhere to the mall's dress code, she said: "I really don't find it necessary, besides I don't have long or covered outfits, and the most importantly I didn't do something bad to Dubai or its people."

Katayoon Tahmoress M, an Iranian writer based in Dubai agrees with Tania.

"I love Dubai and I like its style. But the way I dress is completely a personal matter and I don't allow anybody to educate me on what to wear and what not to wear."

So we have a combination of arrogance, lack of awareness, lack of knowledge, lack of information and standards allowed to be ignored in the pursuit of dollars.


The Gulf News feature is here.

Comparison to other countries policies is disingenuous, expats in Dubai are not immigrants, even if we did take the time and effort to assimilate we will all be kicked out when useful working life is over. It is a two way thing.

Brothels and prostitute laden bars is fine though.

I think it all boils down to basic courtesy. If you visit friends, you don't go there wearing clothes that you know they will find embarrassing. So why do it when you are visiting another country? Any visitors who go to Dubai surely know that it is a Muslim society. There is enough information in the news and on the internet for anyone to know that Muslim society appreciates more modest behaviour than what is tolerated in most western countries. It is plain rude to insist on your "right" to wear what you want.

I think that there is some difference in what people may consider a 'public' space; Dubai is not a pedestrian city and these people that wear 'inappropriate' clothing aren't exactly walking around the city half naked (in most cases).

Maybe the problem is that people congregate at malls, and people are comfortable in malls. I would like to see someone wearing hot pants on a public bus or on the metro when it finally starts.

There are no signs on the street side telling people to wear 'respectful clothing' so what are people respecting? The mall? The western shops? The American restaurants in the food court? The shops that sell the exact clothes they are wearing?
A mall is hardly the epitome of Emirati culture so I can see why people would think it difficult to think they are somehow disrespecting the culture when they are in a marble floored commercial emporium that barely even has Arabic signage. Maybe if they were walking through the Bastikya area wearing hotpants then it would be another issue entirely--but on the whole people don't.

whatever you say, grandpa. and as for what Richard said, I agree. Cut down on rampant prostitution, and I'll consider the dress code. Allow the sex trade to run rampant then you shall be entitled to no superficial conservatism.

Anon@1.35 you must be referring to a different blog. Nowhere did I compare countries' policies, nor does that have anything whatsoever to do with this post.

...we will all be kicked out when useful working life is over makes it sound as though you're simply being used and there's no advantage to yourself in being here. Why do you stay?

I was having my make-up done at a shop the other day when a girl and her boypal were browsing the shop. 'What do you use then?' she said. 'Oh I use this one...' he goes, walking past a girl in hotpants.

"At the next table were two young men in thongs..."

Oh my. Dubai is just going down the drains, thank God I left.

Great article, and I agree that a core problem is not so much the standards they set themselves, but that it's not uniform between men and women (and even where the law is the same between men and women, the courts are harsher on female transgressors). I've linked to this article from my page on Dubai dress code.

Richard, hypocrisy is high up on my hate list, but it's hardly worth pointing out in government, there isn't a government in the world that isn't guilty of it.

"miniskirt and according to my background it is a decent outfit"... seabee, I almost fell off my chair with laughter when I read that: Russian ladies in Dubai see miniskirts as decent day-time outfits, hilarious & sadly typical.
I think also a lot of tourists are "to blame" for wearing shorts and clothes that are more suited to the beach in the shopping malls. They're on holiday so they probably don't see anything wrong with that (which is still strange IMO, because when I'm on holiday I don't walk around in beach clothes UNLESS I'm actually AT the beach.) I do agree that I think it's more ignorance than intent. And in some cases: sheer stupidity. If, as a woman, you're walking around areas such as Satwa or the souks half-naked, and then you complain that men are constantly staring at you / following you and you don't know why... THINK!

ZTG, 'think' isn't something that most people do I'm afraid.

On your point about holiday wear, I've never understood the mentality either. You might remember on a forum we're both active on a question from someone coming to Dubai along the lines of: 'when he's on holiday my husband only wears shorts, is it OK to wear them in Dubai's five-star restaurants'.

True, but I can't think of examples in civilized societies that knowingly allow sex trafficking or comparable illegal activity - probably worth pointing out.

Richard, you are hitting your head against the wall here. Do not expect someone here to concede that the local govt is even 1% more guilty that that of countries like US and UK, on the subject matter. some people cant tell the trees from the woods, and some can but would not accept it as it is an inconvenience right now.

So, Westerners who visit or live in a Muslim country are supposed to adapt and change their habits and behavior according to the local culture. At the same time, Muslims who travel or move to the West want to keep their own with no change at all. That's not ignorance? That's not arrogance? Or some people find those double standards OK?

It's also surprising to me there's one thing left unnoticed: basically, this campaign implies Muslims consider Westerners indecent for wearing certain clothes or acting in a certain way. Obviously, there's a huge lack of respect here, but going into a different direction than suggested.

Anon@9.20,you make a huge sweeping generalisation about people and societies, and you're comparing apples with oranges.

Western countries such as the UK and Australia, which I know well, have officially promoted multi-culturism (a huge mistake in my opinion). They have encouraged immigrants to bring their culture with them and to continue to practice it. Most immigrants have integrated but a minority keep pushing the boundaries because that's what they were told they could do, to bring and practice their culture.

Dubai is a Muslim state, is a guest-worker society not allowing immigration, is liberal by Gulf standards but conservative by western standards. There's freedom of religion and people have a large degree of cultural freedom, but it's multi-national rather than multi-cultural and there are society standards which must be followed.

Interestingly, it's criticised when it's Dubai policy but it's exactly what people in western countries are demanding their governments introduce.