On her blog A Year in Exile Melanie talked about the Dunkin Donuts story too, as part of her concern at 'Bigotry, discrimination and prejudice' she'd been appalled to see in the American media.

There's been a story in the Sydney Morning Herald on similar lines.

We're here in Muslim Dubai, where we have other religions' places of worship and schools.

In free, liberal, laid back Australia, where giving everyone 'a fair go' is claimed as some sort of unique attribute, where multiculturalism is official government policy, we have this.

"Am I the new Pauline Hanson? I hope so" 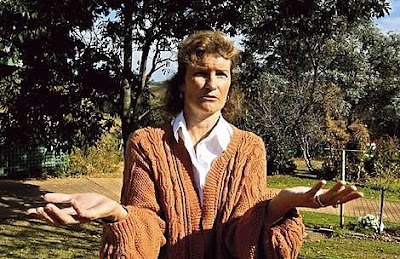 Having railed against Muslims who "take our welfare", Mrs McCulloch, 45, now says she is considering following Mrs Hanson into politics.

Mrs McCulloch, who owns a hospitality business in Camden, accuses Australia's Muslim leadership of saying nothing while mothers and children are used as suicide bombers.

"The ones that come here oppress our society, they take our welfare and they don't want to accept our way of life," she said after the council vote.

However, not all of Camden is behind her. A 72-year-old farmer in Argyle Street, Camden's main thoroughfare, said giving Mrs McCulloch publicity was the best way to silence her: "Eventually she'll choke on her own words."

Hanson made a noise, got some redneck support, inevitably made a complete fool of herself and has disappeared. Publicising her ramblings worked there, so the farmer probably has it right - publicise them and they bury themselves under their own manure.

Religious fanatics, racists, the sweeping bigoted mis-statements, said with such conviction...these people are a disgrace to the human race. They disgust me.

The story is here.

Just a quick bit of background. Muslims and Australia pre-date Europeans and Australia. Indonesians were trading with Aboriginals in the 17th Century, way before Europeans arrived. In the 1860’s many Afghan cameleers worked the camel trains which opened up the interior of the continent. The famous Ghan railway, of which Australians are very proud, is named after them.

When I watched Pauline II on the news she looked like a lady from the 50s.

You should have seen her when she attended the council meeting - in a hat with Oz flags all over it. The things you see when you don't have a gun.

I love the irony in it, which you see just about every time, whether it's Oz, the UK, US...bigots and racists wrap themselves in the flags that they're a disgrace to.

it scares me how these stories are becoming more and more frequent :(

I know this all seems like bigotry, and for the hundreds of locals gathered outside the pub on the news the other day, it may well have been for a great many of them. For the council, though, I thought the issue was that Camden is a small town and the school was going to be for 2,500 pupils. Their problem was with the great many children that were going to be bused in every day, and the associated disruption. Had the application been for a smaller school, it may well have succeeded. Camden is a lovely little place, and I don't think I would have wanted a 2,500 pupil school built up the road from me, be it a Muslim school, Catholic school or clown school!

True, Kathryn, and that may well have been the council's reason for turning down the application, as they have said.

That has nothing to do with the racism and bigotry of people such as Kate McCulloch, which is what I posted about.

Bleeding hearts the lot of you. Ask a jew if he can worship in Dubai. Any synagogues anyone? If I proposed to build a large one in Dubai how would that sit with the local populace? And I am tired of Israel getting used as some kind of an excuse. Israelis and jews are NOT the same thing. Indeed Bigotry IS alive and well, pretty much EVERYWHERE because that's human beings for ya.

anon, so complaining about discrimination makes us bleeding hearts does it? We should simply accept it in silence?

Not that I understand where it fits into the posting about bigotry in Australia, but you come up with the bleedin' obvious that Israel and jews are not the same thing. Yes we all know that... and?